skip to main | skip to sidebar

I was inspired to make a batch of whole wheat sandwich bread after seeing pictures on one of my favorite cooking blogs. I was very committed to making our own bread in late 2004/2005. Then, I somehow got sidetracked, and abandoned my baking. (oh, yeah, I had another baby in early 2006). The smell of baking bread, cutting into a lovely loaf, and the wonderful work out of kneading your own bread is a heavenly experience. I have tried a variety of recipes, and find some more interesting and others more kid friendly. The bread I made today definitely has a kid friendly texture, color and taste.
Bread making should not be intimidating. It really isn't hard at all. It isn't even that

time-consuming. The trick is you just have to be home for several hours to see the process from start to finish.
A few key points... the amount of flour can vary depending on many factors. I have found that when the bread clears the side and most of the bottom of the bowl you are done adding flour.
You need to have a stand mixer with enough power to handle the dough. I reduced the recipe to 2 loaves and still had to finish kneading by hand.

I do believe that I usually have let the dough rise twice, but this called for a single rise once it was formed into a loaf.
The American Test Kitchen has excellent pictures on how to form a loaf, but I am still practicing. After letting it rise for about 90 minutes, it was ready to go. I put it into a cold oven and baked for exactly 90 minutes. I did brush butter onto the top of the loaf when it was done, but that's about it. The amount of actual hands on work time is quite minimal, however, I think it was at least 3 hours from start to finish. Growing up, my father would bring a television set into the kitchen and make bread while watching Monday Night Football. He would often cut a warm slice and deliver it to us if he still heard any pitter-pattering. Pure love and goodness!!!
The verdict on this bread was a definite yes, make again. The entire loaf was gone in about 2 days!! Enjoy! 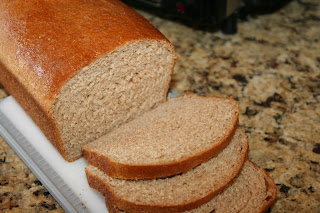